An overview of the plan to get SimpleTest ready for core can be found at the SimpleTest Roadmap for Drupal 7 post which links to the specific discussion on unit testing. Over the weeks since Drupalcon Boston 2008 we have accomplished an enormous amount of cleanup and testing. The SimpleTest module has been transformed into the future of Drupal testing.

At the sprint we intend to continue this by moving into unit testing instead of functional testing which is almost complete. The accelerated development schedule is necessary in order to meet Dries’ deadline, which is fast approaching, for complete coverage of Drupal core and extend the developement cycle. Testing will not only extend the cycle of development, but also make Drupal more stable by ensuring that changes to the core do not break Drupal. The tests will provide a wall of protection as illustrated below.

Due to my role in the SimpleTest area it is important that I make it to the sprint. The work that will be completed will not just help one area of Drupal, but Drupal as a whole since it will allow faulty patches to be much more easily recognized which will make reviewing core patches much easier.

Many things need to be completed before the coding sprint. The first of which is the completion of the unit testing plan. Once completed I will update SimpleTest Unit Testing module to use the decided standards and generate the unit test stubs. The module automatically parses all core files and determines what functions need to be tested and what functions each of them are dependent on. The stubs will then be committed to the SimpleTest repository. 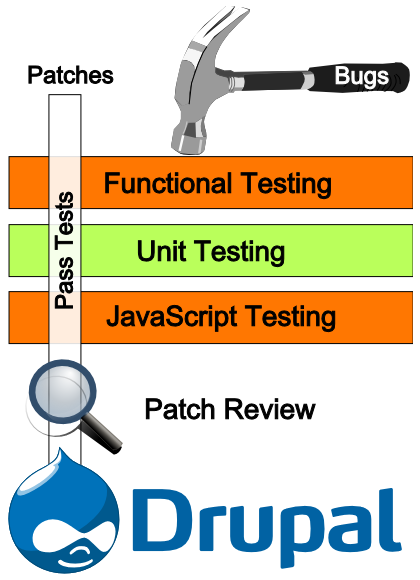 All major changes to the SimpleTest API need to be finished so that any tests written at the sprint won’t have to be updated. This is almost complete, but there are still a few remaining issues.

What I Will Accomplish at the Sprint

At the sprint I will accomplish several things in coordination with the other developers at the sprint.

In order to accomplish this a group of knowledgeable developers will gather at the sprint in addition to others not coming only just for the sprint.

After the sprint there will most likely still be some unit tests to write, but a major portion will be done and the guidelines will be affirmed. At this point developement will need to continue in order for the unit tests to be completed before the deadline.

The community will need to rally in order to complete unit testing by the deadline only 90 days after the sprint, but the progress made at the sprint will be necessary in order for this to be plausible.

My Contributions to Date

In order for this to be accomplished I need financial support. I live in the United States and will need to fly to Paris in order to contribute at the sprint. If you are in a position where you can help donate, anything helps.

You can contribute using the Chip In widget above or by clicking the following link Contribute (no-flash).

I am Jimmy Berry and I would like to attend the coding sprint in Paris to work on unit testing for Drupal 7. I, boombatower, have become a major contributor to the SimpleTest module, both in functional tests and as maintainer. I have been working to get SimpleTest cleaned up and ready for inclusion in the Drupal 7 core.