Reworking my blog as a static site has been something I have been toying with for several years, but didn’t commit to seeing it through. I imagine a large part of this was due to falling out of writing posts for a number of reasons. For several months I enjoyed writing posts on a static blog covering my openSUSE work, but that also made it easier to avoid updating my blog.

I have finally completed the process and pushed out a blog based on Jekyll. The process certainly was not as straight forward as I expected and there are a decent number of gotchas. Since the conversion principally took place over the last year (no more than a few days work in total) I do not remember all the bits involved in converting it, but I’ll document the ones that I do remember in the hopes of saving someone else a bit of time.

Previously, my blog was built using Drupal 7, before that Drupal 6, and before that Blogger. As such the content is not designed for any of those systems, but rather a mix. I decided to try and avoid fully porting the content and instead only port the bits that necessitated it.

For posterity, here is the Drupal 7 and new Jekyll blog at the time of this writing. 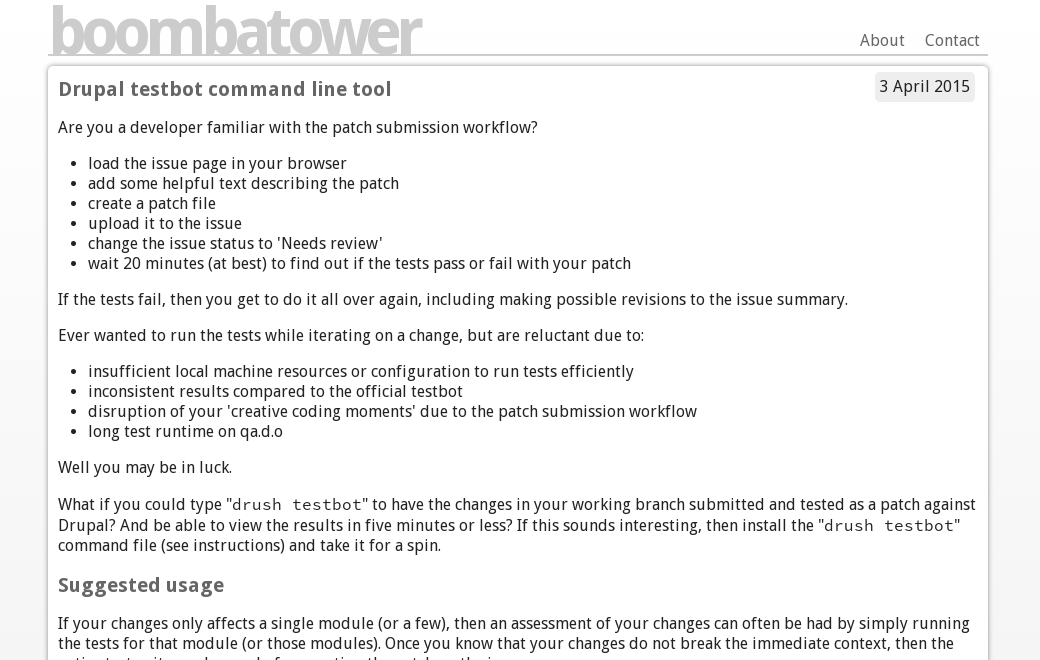 Some posts and tooling exist to convert a Drupal site to Jekyll. Using the jekyll-import gem as a basis I started with the following against a database dump of my Drupal 7 blog.

That produced a rough Jekyll site containing all of my content which provided a solid basis from which to iterate.

I played around with a variety of the installed and dockerized Jekyll setups, but found them all rather lacking and cumbersome. I ended up pushing everything to Github (blog-test subdomain prior to completion) to avoid the mess as that was my target destination anyway.

Using a CNAME file in the repository root and configured DNS to point to boombatower.github.io I was able to view the site.

Given the posts on my blog date back to 2007 it, rather reasonably, turned out that a number of the posts embedded content that no longer existed. Additionally, some content had moved and while other worked it was deprecated or really should be self hosted.

First, I downloaded all the files still referencing blogger.com and replaced the references with self-hosted ones using the following script.

Reviewing posts I replaced dead content with short text which provided, for posterity, a reference to what was there.

A few external images referencing other blogs had been updated and had the URLs changed. With a bit of searching I was able to find the images download them and replaced the references.

One image was utilizing the long deprecated Google Charts API (image based), but Google apparently kept the service going so another download and replace.

One of the problems I ran into was broken links due to URLs either changing or being removed. I was determined not to contribute to broken links by ensuring all the existing URLs on my blog continued working regardless of the new canonical URLs. While the jekyll-import gem properly exported the various paths for a given post from Drupal it represented them as markdown files at the given path with instructions on where to redirect. For example, acquia-internship.md:

Overall, this was a bunch of files and not easy to manage aliases. Rather I was looking for a list of aliases in the actual post file. Thankfully, I found the jekyll-redirect-from gem. After adding to list of gems in _config.yml the following worked from within a post:

I then wrote the following script to automate the conversion.

After a bunch of exploration I ended up avoiding the categories and tags. Both seem to require a fair bit of configuration and a theme that support them. My goal was to keep this blog simple and most people will find my post from a search engine instead of perusing my blog.

Using a derivation of the above script I removed all the category information (tags from Drupal).

Since many of the posts were written in using HTML instead of Markdown they had unfamiliar syntax highlighting tags. After incrementally finding them all I ended up with the following script to make the conversion. Nothing pretty, but does the trick.

Some of my posts contained special inline image formatting where the image was contained within a <div> containing a caption. The div had float: right applied via CSS. Due to the image sizes and reduced width of the site I removed most of the formatting and some of the captions. Not ideal, but I expect little traffic on the old content and this leaves the most more than readable.

A number of useful and positive comments had been left on my blog over the years, but a large number were ill conceived or blindly negative. Given I am the one maintaining providing things for free and gain next to nothing from comments I decided to drop them entirely. If folks want to contact me good ‘ol email works just fine.

It does not seem readily documented, if at all, but Github pages uses minima version 2.x instead of the stable 3.x which means one needs to read the documentation from the relevant branch instead of master. The 3.x version changed a number of the configuration option keys along with the location for custom CSS which is assets/main.scss in the 2.x version.

Overall, I am satisfied with the result and look forward to writing up some technical posts like this one.